“Something magical happens that I can’t control,” artist Tonja Torgerson explains as she talks about street art and the ways something beautiful and unexpected can change our perception of an urban city. Tonja is an MFA student at SU who has had various art shows throughout Syracuse, including a solo exhibition at the former Craft Chemistry entitled, Sick at Home, in 2012. She’s also one of the co-founders of SUBPAR, the very first innovators to win a Salt City DISHES grant for their “art intervention” project in 2011. Presenting in front of such a large group of people was both nerve wrecking and exciting, even with the help of SUBPAR co-founder, Joel Weissman. “I’ve never done anything like that before,” Tonja explains. With the fourth DISHES dinner in the works for May 5, she reflects on her experience with street art and offers some advice to the future DISHES presenters.
The project that SUBPAR proposed at the first DISHES event was to incorporate street art throughout Syracuse, specifically as part of abandoned or dilapidated properties. What makes their project so compelling is the ability to inspire dialogue about a space’s purpose and it’s possibilities. The DISHES grant helped SUBPAR install four ceramic tiles in front of an abandoned building on N. Salina Street, formerly a center for worship and a community meeting place. The tiles were screen-printed with the words “touch base” for two important reasons: 1. to attach the building to its past life as a center for connecting people to each other, spirituality, etc.; 2. to establish a connection between the onlooker and the building so that we can re-imagine the space’s future. The tiles also had another very practical purpose: it acted as support to the building’s broken façade.

When we think of street art, it’s often loud in order to make a large statement. “But ours is a little whisper,” Tonja explains, “and if you hear it, it’s an amazing experience.” When street art is quieter it has the advantage of being unexpected and its small size immediately elicits questions: Who put that tile here? What is this building? What could it be? How can I look at Syracuse differently?
More public arts projects are in store for SUBPAR. They will soon be showcasing a working bicycle that turns into a print making station at a printmaking conference. They've also been busy placing tiles in former phone booths in each of Syracuse’s neighborhoods. So far there are 10 on display, but more will be popping up in the next few weeks.
The “art intervention” proposed by SUBPAR is still an ongoing project. The pieces take a lot of planning. For example, asking for permission to incorporate art into abandoned properties is a time-consuming task.  It can be difficult to first find the owner of the building and then to keep in contact during the process. Tonja, however, views this challenge as an opportunity to really think about the artwork and make sure it fits with the space’s history and the architecture of the building.
In addition to the time spent on projects for SUBPAR, Tonja is also working on her own street art. You may have seen some figures floating around Syracuse, on walls and overpasses like this one: 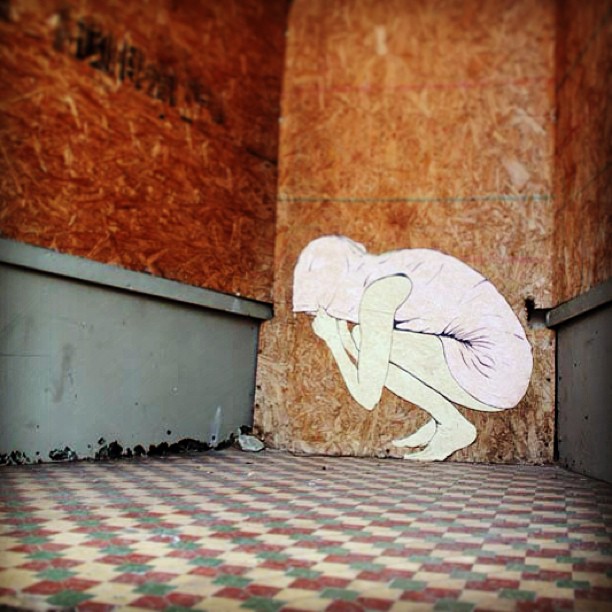 Tonja uses a wheat pasting method to secure the pieces throughout the city. This procedure means that the art is not permanent: it will fall apart over time and it’s less difficult to remove if needed. The theme of impermanence fits well with Tonja’s work. Her pieces both draw you in while making you feel uneasy by juxtaposing whimsy with the reality of illness.  Tonja explains that on-lookers are “confronted with the inevitability of the end. [This art] needs to have a finite existence in the world. It will be obliterated—and I think that’s very fitting for how we exist in the world in a lot of ways.”

Right now, Tonja is preparing for the MFA Art Show at Syracuse University beginning April 4-May 12. She will showcase copies of her life-sized images that are pasted around town. Tonja will graduate from SU this spring and is busy applying for jobs, fellowships, and thinking about what’s next. In the meantime, she’s preparing a project update for the DISHES and offering advice to presenters who hesitate to think big. “Go for it,” she says, “You’re pitching something you’re not sure you can pull off, but you have to figure it out because now the community is invested in it. Make it great.”

The 2018 DISHES event is taking place on Sunday, February 18th at 1342 Lancaster Avenue, Syracuse, NY at the Bishop Harrison Center next to All Saint Parish! 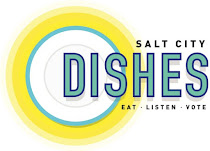 Salt City DISHES brings community-minded people together to share a meal and award crowdfunded micro-grants to innovative projects that enliven the City of Syracuse.